Trust me, I’m an expert

Trust me, I’m an expert…

There was a time when declaring yourself as an “expert” was looked upon by the media and the wider population with some scepticism. And while some self-declared experts should still be regarded circumspectly, there’s a real and ever-increasing demand for comment, reassurance and input from bona fide experts.

The Edelman Trust barometer has been measuring levels of trust in people and institutions around the world for the last 18 years. Its 2018 survey, which polled more than 33,000 people in 28 countries, found a resurgence of trust in voices of authority who are now regaining credibility in a world where fake news and disinformation have caused massive turmoil. Technical, academic and financial experts plus entrepreneurs and CEOs all had rising levels of credibility.  At the other end of the scale, trust in government officials and journalists rounded out the bottom, despite both groups improving on their 2017 results. 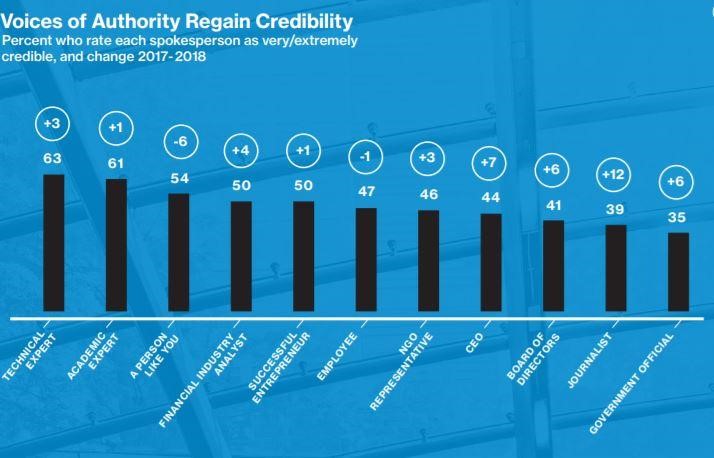 So what’s driven the rise of the expert? According to the Edelman barometer the credibility of “a person like yourself” is at an all-time low – dropping 6% from last survey. This is likely due to the impact of social media and a growing distrust regarding the origin and truthfulness of peer-shared information on platforms like Facebook. Fake news and its permeation into the world’s collective consciousness has become a serious issue, no more so than in the U.S., where according to Edelman, 63 percent of the general population finds it difficult to distinguish between what is real news and what is fake. Already, countries like France, Germany, Ireland and Singapore are taking legal steps to crack down on the deliberate dissemination of false or fake news.

Coinciding with the rise of the expert, is a greater expectation for businesses leaders and CEOs to take the lead on change and important social issues. According to the Edelman barometer, sixty-four per cent agree that CEOs should take the lead on change rather than waiting for government to impose it.  In Australia, business leaders like Qantas CEO Alan Joyce, FMG’s Andrew Forrest, Gina Rinehart and former Wesfarmers boss Richard Goyder have all been vocal on social issues outside of their core business. Joyce in particular, came in for criticism of his outspoken support for gay marriage, with politicians like Peter Dutton telling him to “stick to his knitting”. To which Joyce responded in an interview, “…so we’re very happy with sticking to our knitting, but our knitting involves being part of the community, and our knitting involves us being outspoken on issues like this”. Joyce’s comments correctly mirroring the sentiment of the barometer’s findings on CEOs needing to take the lead on social issues.

But how does an expert establish credibility and trust? First, they either have qualifications and or significant experience around their area of expertise. Fly-by-nighters will quickly be found out by the media and also have the potential to wreak enormous damage to their own business and also their wider industry, by ill-informed comment or opinion. The second way many experts establish their standing is to have served, or be serving on an industry body and have a reputation for success and excellence in their area of endeavour. Being a media “go-to” spokesperson for your industry or on your area of expertise is a powerful tool in further establishing your credibility and trustworthiness. Providing of course, your comments are reasoned, factually based and published in reputable outlets.

The Trust Barometer’s findings provide an instructive answer to one of the most common questions we get from potential experts – “Why would the media be interested in my opinion or thoughts on an issue?” Clearly, now more than ever trustworthy voices are sought from all areas of endeavour and the days of fearing the media and remaining silent on issues and news in your field are ending. For business leaders everywhere, this news should be met with optimism and a new-found confidence in their ability to not only positively influence debate but to provide valuable and sought-after information to the wider community.

If you are a leader in your field and have the desire to become a trusted voice in the media contact us today to discuss your Media Stable expert profile.