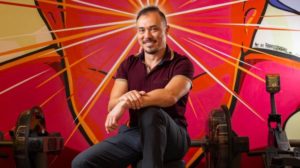 How jewellery paved the way for Andrew Ballantyne to open Synkro Wellness Centre.

When Synkro wellness centre owner Andrew Ballantyne was in his early 20s, he wasn’t entirely sure what he wanted to do with his life.

After leaving high school in 1996 to undertake a jeweller apprenticeship he joined his family’s business, Ballantyne Jewellers, which was founded in 1981 on his first birthday.

While Mr Ballantyne gained a great deal of respect for jewellers during his early years working in the sector, he admitted it was never his personal passion.

“I was lucky enough to have some amazing jewellery teachers … but I thought there has to be more to life than making jewellery all day,” he said.

Not sure what his passion was exactly, Mr Ballantyne — who hails from Northam — packed up and went travelling around WA and overseas for around three years.

“I chased the sun for a few years and had a good time. When I hit around 26, I thought it was time to start building something,” he said.

Ironically, Mr Ballantyne ultimately found his passion back in the jewellery industry when he opened a Pandora store with his father, Les, at Westfield Carousel in 2010.

“We already sold Pandora in our little family jewellery stores. We could see how well it was doing,” he said.

“Then the opportunity came to open the first franchise in Australia, so we were lucky to get in right at the ground.”

They also went on to open Pandora stores at Midland Gate and Galleria.

Mr Ballantyne was charged with managing the stores, which he said proved to be a significant personal challenge.

“I went from a family jewellery store of 5-6 staff members to 70 staff at Pandora,” he said.

“So learning how to manage that many people was like a baptism of fire.”

Throughout his time as operations manager at Pandora, Mr Ballantyne said he noticed the biggest improvement in his team’s performance when he started running wellness workshops.

“The courses were getting a lot of traction. We found that the staff were performing better in their roles and reporting improving their relationships at home too,” he said.

After realising how much he valued helping his staff boost their wellbeing, Mr Ballantyne set his sights on establishing his own wellness centre, Synkro, which opened at Karrinyup Shopping Centre in early March.

Synkro was designed to help consumers access wellbeing services in one place, offering everything from Pilates to IV vitamin therapy.

Mr Ballantyne said his long-term goal was to expand Synkro in WA and across the country.

Running multiple businesses had taught him the importance of not micro-managing and considering all elements of the company’s operations, he said.

“Micro-managing is the biggest killer in business … people wanting to hold onto too much becomes toxic,” he said.

“The other big mistake is not working on systems. A lot of first time business owners, especially if they come out of a trade like I did, they forget about the other parts of the business like finance, marketing and operations.”

Reflecting on his career journey, Mr Ballantyne said it would have been beneficial to have received more business education in high school.

“Small business is the backbone of the community … when I was at school there was no education to do with anything more than paying your taxes and working for a company,” he said.

Mr Ballantyne said it was important for schools to place less pressure on young people to choose a career pathway at such a young age, and focus more on developing creativity instead.

“Having to feel like you need to get your life together by 17 — that is wild,” he said.