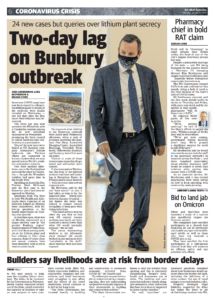 RAT packs will soon be in ready supply across WA.

West Australians are being urged not to panic if they can’t find rapid antigen tests at pharmacies and supermarkets yet.

“The tests are coming, we are playing a bit of catch up because we weren’t able to sell the tests in WA while the east coast could, so a lot of the supply went to the east instead of WA,” he told Gareth Parker on 6PR Breakfast.

“But the suppliers are catching up, so I would advise everyone not to panic, especially if you have a concession card or a pension card … don’t rush out and buy tests, because the government does have a scheme where you can get five tests every month or 10 tests every three months and that will be supplied by the government, through the pharmacy, but it’s covered at no cost.”