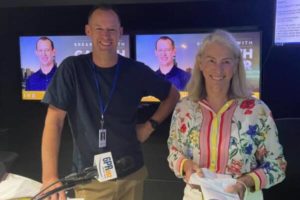 Reducing nutritional poverty in Aboriginal communities, from the ground up.

Recognising that poor nutrition was a key reason for health disadvantages in Aboriginal communities, Caroline De Mori founded EON, which partners with Indigenous communities and schools to create access to fresh and affordable fruit and vegetables through edible gardens and other initiatives.

“I saw first hand for the first time what was going on…  it’s just the most shameful thing to be in such a successful, powerful, rich state and yet there’s children with health statistics and infection and disease loads that are just outrageous, worse than the poorest developing nation on the planet,” she told Parker.

“It’s the nutritional poverty that leads to for example some 70 per cent of Aboriginal kids starting school with hearing loss.

“I was very lucky to come across a wonderful man, the late great Ernie Bridge … who was a great role model for me and my partner in crime [EON director] Katrina Burton.