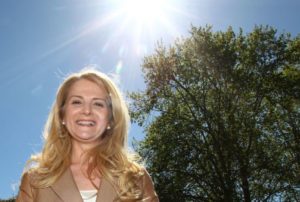 Angela Vithoulkas has put her hand up to become Sydney’s next Lord Mayor, but she keeps being told to take it down.

The founder of the Small Business Party has received numerous anonymous phone calls demanding she drop out of the race.

“I’m already getting calls, I won’t say from who, but calls from other political parties who are telling me I’m wasting my time and saying, ‘why are you even bothering to run, you’re not going to get elected’.”

“I formed a political party in NSW, which is almost completely impossible from a red tape perspective … yet (some say) I only run in an election to get a husband.”